Hey guys!
Sorry for the long waiting period. We felt that the long promised farming feature wouldn’t be truly legitimate on its own. Without additional features it would have been just another way of getting the same items as you’d get through NPC-combat. So we overhauled the consumables and added a temporary character status effects system. There are lots of new items and even some new skills.

Farming
The new farming feature is an approach to accommodate more peaceful players with the ability to receive items, resources and wealth. To successfully grow plants you need seeds and nutrients. 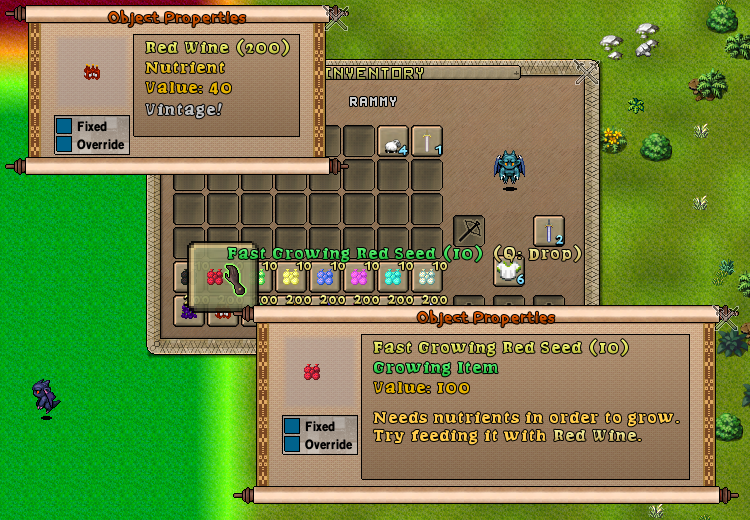 Seeds come in eight known colors: black, red, green, yellow, blue, magenta, cyan and white.
A seed yields a slow, medium or fast growing plant. Slow growing seeds are the most rare ones, as they give the highest reward on harvesting.

Every plant has a certain amount of growth stages (i.e. how many times you have to feed the plant), a certain feeding time (i.e. after which the plant withers if it doesn’t get nutrients) and a certain growing time (i.e. the time the plant needs to advance to the next growth stage after feeding).
If a plant reaches the growth stage ripe, it can be harvested and will give pixels of its color and items as reward.

The three growing speeds should suit a wide range of players and should cover most playing styles/paces.

Seeds and nutrients can currently be found in NPC loot.

How does it work?
To plant a seed you need to be on your property (estate or owned world). The seed needs to be in your inventory. Just click left on it and it will automatically be placed beneath you on the ground and fixed – the growing process starts.
Note: un-fixing a thusly planted seed or plant will destroy it – no relocating!

Feeding the thing is as easy as left-clicking on it. If you have the right amount of nutrients in your inventory.

After the growing time the plant will reach the next growth stage.

Repeat until the plant is ripe.

If you wait too long, the plant will wither and your only option is to remove it without getting any reward.

Status Effects
A new system has been implemented that allows for putting temporary status effects on any character. Currently, this system is used with the new consumables, but is in no way constrained to that.

Here are some effects, that are currently implemented with consumables:

This new system allows for exciting additions in the future, like casting magic spells, weapons that deal effects on enemies and even groups of NPCs that buff and heal each other and debuff players.

Consumable Overhaul
One general addition to consumables is the cooldown. Burning through stacks of berries and cheese in mere seconds doesn’t work anymore. Cooldowns apply per-item-type. That means that there are seperate cooldowns for berries, fish, cheese and so on. Those cooldowns appear in the upper left of the screen.

Simple Consumables
Those can be found in the wilderness, for example by cutting berry bushes.

Normal Consumables
Those are usually found in NPC loot and can be bought at merchants to some extent.

Simple and normal consumables have very basic effects, such as instantly healing hitpoints or stamina.

Special consumables come in one of three different rarities: common, uncommon and rare. They drop from plants with certain grow speeds.

The consumable’s rarity defines its effect strength and duration. Rare consumables are the most powerful ones.
Note: similar effects don’t stack. The strongest active effect of one kind applies.

Beware of side effects!
Special consumables not only apply a beneficial effect to the consumer, but yield a chance to apply a negative side effect as well. Side effect chances are added up on consumption and apply as long as the effect lasts. Side effects range from minor discomforts to dangerous death-bringing hazards.

New Skill: Strong Stomach (combat)
Luckily, along comes a brand new skill that reduces the chance of side effects kicking in.

Again, sorry this update took so long. Both of us, Lithion and me, also got sick during the last weeks, which prolonged the development time. We plan to put updates out in a higher frequency again.