When in combat mode, just press the left mouse button to attack. You don’t automatically attack a selected enemy. In Gonzo you potentially hit everything within your hit radius and angle. Potentially; because there is a slight chance to miss. Also, the amount of enemies that can be hit with one strike is limited and depends on the length of the wielded weapon. On successful hit, enemies are knocked back. There is a chance to score a critical hit, which not only does more raw damage, but also bypasses the enemies’ armor. Every attack costs stamina. Some (e.g. longer) weapons consume more stamina per slash than others. Keep that in mind, as getting exhausted in a fight can cause serious forms of…death. 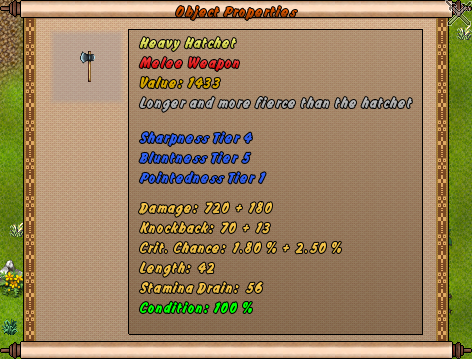 Some values are shown as a sum of two numbers. The first one is the base value from the item itself and the second number is a bonus that comes from skills or other character effects. 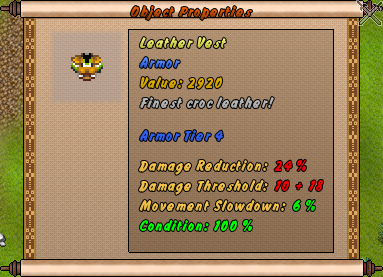 When using weapons and armors (e.g. by hitting enemies or getting hit) they slowly deteriorate – the condition is being reduced. You don’t have to worry, as long as the condition is at least 50%. From that value downwards to 0% the effectivity of the item is being reduced down to 10%. Items currently don’t break. Usually, only the base values are affected by low condition.

Note, that you cannot use every weapon or armor in the beginning. You’ll need certain skills to use weapons and armors of certain tiers.

NPCs have different kinds of behaviour. Some become aggressive when you get too close, some will only defend themselves if they are being attacked. Some may even stay friendly and endure the pain. Aggressive NPCs will do damage when touching players. Some do damage on contact even when they aren’t aggressive towards you. So better stay clear of any hostile-looking NPC.

NPCs come in different sizes, colors and with different stats such as damage, speed, hitpoints and toughness. The overall strength of an NPC is calculated into one value – the danger level. You can look this one up by right-clicking on any NPC.

In terms of materialistic gain, defeating an enemy grants you

Coins and pixels are given directly to the slaying player. The loot, if any, will drop around the corpse. Those items are reserved for the slaying player and cannot be picked up by other players for a certain time period. Generally, a simple rule applies: the higher the danger level of the slain NPC, the more coins, pixels and loot you will probably get. The pixel colors you get from a defeated NPC correspond directly to the colors in its ingame graphic. A sheep for example will get you mostly white pixels, whereas a wasp might have more yellow and black pixels to offer. Easy kills won’t get your far. If your character level is considerably superior to the NPC danger level, the gain of coins, pixels and items is reduced down to a nonsignificant amount.

Well, it happens to the best of us. At one point or another, you may find your master in a certain NPC and get killed. Don’t worry, you will respawn at the respawn point you activated last. Be aware, however, that you will lose coins and items from your inventory when dying. The former are lost. But dropped-by-death items will keep on laying there, until they decay or someone picks them up. Items lost that way become being reserved to you for five minutes. During that time nobody except you can pick’em up. So don’t give up, hurry back and try to save your stuff! Note: the higher your character level, the more coins and items you will lose on death.

However, there are more peaceful ways to interact with other characters, such as trading.