Move about with W, S, A, D.
There are three cursor modes: object interaction, combat and construction.

While on public land, only the first two are available and you can switch between them by pressing SPACE.

Just click left to use items. The cursor is context sensitive. Move items around with drag&drop.
To get information about an object, be it an item, an NPC or another player, just right click on it. 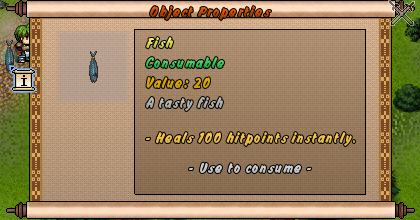 Pick up items by dragging them over your player object or directly drag them into an inventory slot if you’ve opened it before by pressing I.

To drop items from your inventory, just drag them over the edge of your inventory window into the game world.
Pressing Q while the cursor is not over a window will automatically pick up all loose items in your vicinity.
On the contrary, if you press Q while having the cursor over an item in your inventory, that item will drop right next to you into the game world.
Furthermore, if you do the latter while a trading window with an NPC merchant is open, the item will automatically be sold.
Note: picking up objects with Q won’t work for items that were freshly created by an object spawner (e.g. berries around a bush).
Clicking left on a distant player will create a shouting animation that only you and the other player can see, notifying that player that you may want something. If you’re close, a trading attempt will be initiated.

To conserve server memory, items that lay around in the game world and have not been fixed, will decay i.e. will be automatically destroyed after a while. Currently that while is set to about 30 to 60 minutes.

Continue reading the guide with the chapter about characters.